The David Reeves opera/musical of Cyrano de Bergerac was composed during 1991 – 1992. It was first recorded at Star-Sound Studios, part of Channel 9 in Brisbane in late 1992. His original ‘highlights’ album featured Normie Rowe as Cyrano, Simon Gallaher as Christian, Penny Hay as Roxanne and Kirri Adams as the Duenna. The Queensland Symphony orchestra accompanied the soloists and the chorus from Queensland’s Lyric Opera. 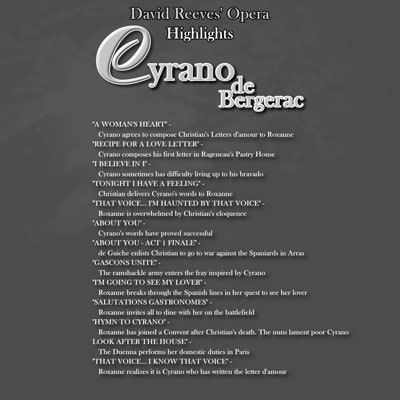 And….. the music gives singers opportunities to flex their dramatic and vocal muscles, to sing high and low without grovelling in the laryngeal nether regions. A children’s chorus gets to process a la Sound of Music and bring it all to a celestial finale, Singers Rejoice!”

“Melody after Memorable Melody – intricate and breathtaking in scope. He is a genuine master!”

“It has some truly memorable and melodic music which can stand on it’s own, the mark of a good musical.”

“Australia has an extraordinary composer in David Reeves. What he has done with Cyrano is beautiful.”

“…the music feels the story. That is the strength of Reeves’ music. It is melodious, it has strong rhythmic pulse, but above all, it reflects the mood of the words. I particularly warmed to Roxanne’s song, About You.”

“There was something about the way Normie Rowe and Tommy Tycho spoke that went beyond natural enthusiasm for a new project – Reeves’ Cyrano de Bergerac…..to say they were keen would be the understatement of the year.”