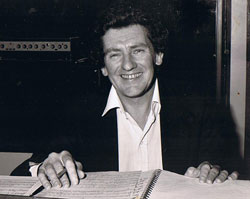 David Reeves has composed for theatre, stage, concert hall and church, he warms particularly to vocal textures in the Cathedral and large Choral traditions. The musical spirit in his organ and piano (jazz) performances as a young performer seems to have infiltrated into nearly all his compositions as a mature composer.

His catalogue includes opera, oratorio, musicals, orchestral and chamber compositions as well as commercial music composed electronically. His work has been seen and heard on stage and in churches, concert halls and festivals.

Reeves began his professional career as a concert organist in the early sixties, turning to conducting and writing some ten years later. He has been described as “one of the most brilliant and unique artistic creative forces to originate from Australia” (Meridian Television 2000) through works including the chamber opera Dorian, the oratorio Becket – The Kiss of Peace, and the musical Seven Little Australians, the very first major home-grown musical box-office success in Australia’s theatrical history.

Reeves’ style is theatrical and filmic, symphonic and homogenous. His work celebrates lyrical and linear melodic phrasing and he tends towards rich orchestration, seeking out all the colours and textures available. His approach to the human voice is similar and he reaches out to the full range and tones of the artists and choirs for which he writes. His leaning toward the classical and romantic is evident but always contemporary and never far away from Broadway. Some say his music is an acquired taste.