MUSIC FOR THE THIRD AGE – This composer’s view at afternoon tea in the game of life.

(An excerpt from a recent note to musicians preparing for a recording of segments of Reeves’ current work, Black Beauty, October 2016)

Please forgive me if I indulge slightly. I’m a strange being. I know that because I’ve been told so all of my life. On the morning in question, I came to consciousness reminding myself I was not far off my seventy-second birthday. Finding my mind drifting to the now quite high pile of musical memorabilia, most of it in the form of scores and recordings made over the last fifty plus years. All sorts of music in all sorts of condition having been recorded at many stages in the development of the humble tape recorder through to the latest in digital technology.

The thing that was disturbing me, dare I say, frightening me, was that this humble stuff is me. It’s not everyone’s cup of tea, and many don’t like it I’m sure, but never the less, it’s unique and it is my life. For I don’t do much else.

And then I thought, is it too early or presumptuous to call it an archive?

The reality came in my next question. Who wants to hear it anyway? And why, especially, now? In fact, who ever wanted to hear it at any time? Information as to air-play and “who listened to what” was pretty vague until recently. We had records of music sales but how accurate were they? And was I ever really told the real facts? Who listened?

And then came the most burning question of all. Even if there were a few that heard my work, that market has moved on. Where are they all now? It scared me to think. But then I made my first coffee for the day, and it hit me. My market is probably all in its third age. Many now worn out by their own intellect and all its reasoning and continual absorption of new information. All getting tired of observing the repeated cyclical moves by politicians, business and so on. The “third age” is full of people who’ve seen much, done much, and, as Epicurus says, are now docked in the calm peaceful waters of the harbour.

At the time all this happened I was busy composing new orchestral arrangements for Seven Little Australians. These for the upcoming thirtieth anniversary of the original production of 1988. It originally opened in Melbourne at the Comedy Theatre. Memories again flooded back. All the excitement and chaos of that first (for me) big production of one of my musicals.

Well into the second plunger of coffee and thoughts returned, ever more deeply about this “third age”. Then about the music business and what people of my generation are listening to today. I don’t know. I just hope one of them has enjoyed a work of mine somewhere in between when it was first created and today.

I found myself in a zone of self indulgence (which we “creatives” indulge quite regularly) this time at quite a deep level. For to me, music is the great communicator. Firstly between the composer and the listener, but thereafter between all people. The whole globe can relate to the sound of music. No pun intended.

So what does that mean for the market I’ve been subconsciously composing and performing for all my life?

Well, number one, is the tune. The main theme. How to lift it, support it, make it hit all the spots, light the bulbs that light up the listener, Especially significant is the treatment, orchestration, how to approach vocal considerations, choral arrangements and a whole plethora of questions relating to just how to get the very best out of that blessed tune that’s been nagging away for however long?

Everything at that moment is about how to milk the passion, the pathos, the emotion, the uplift, or whatever it takes to give all the oxygen possible to that one tune.

Most folk appreciate a melody. Melodies take you on a journey, they remind you of a particular time, transform the emotions, they lift, they cause reflection, they make you sad, they make you happy, they exhilarate, they bring back memories, they do whatever. It’s about living. And getting the most from each decade in our humble but special lives, especially the twilight decades that I call the “third age”. Making the most of every moment, even when you just want to be quiet. Oh bliss. The choice of music and the many options available these days to receive it is unlimited. And it’s yours, you choose.

And for the humble composer, who dares to invade the space of his neighbor, and to communicate in the way that composers do, it’s daunting, whether in the “third age” or not. Please bear with me as we begin the journey of Black Beauty. It’s all about connecting and the orchestra is the vehicle. I consider you to be the best. I hope my notes are worthy and up to the task.

A Close up and Personal expose resulting from several ‘not for broadcast’ interviews with Expatriate
Australian Composer DAVID REEVES. Tracks included in these two ‘MUSIC FOR THE THIRD AGE’
programs are the composer’s choices made on personal reflection at the time of his recently
acknowledged own ‘THIRD AGE’.

MUSIC FOR THE THIRD AGE – THE ALBUMS 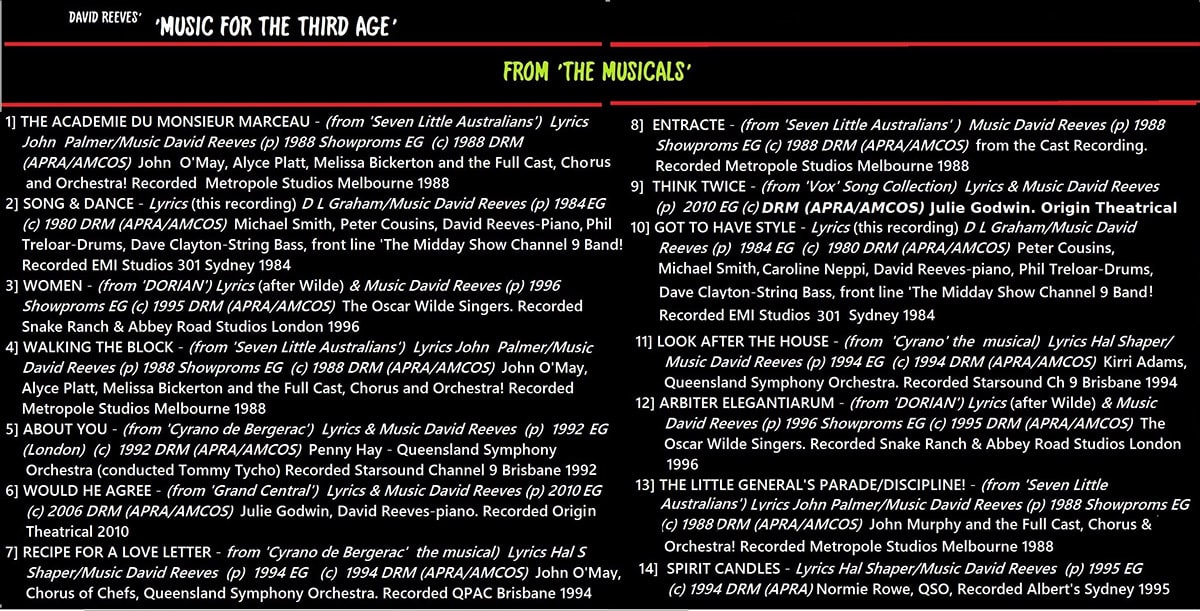 Volume 1.1 – From the Musicals
Available from our Online Store 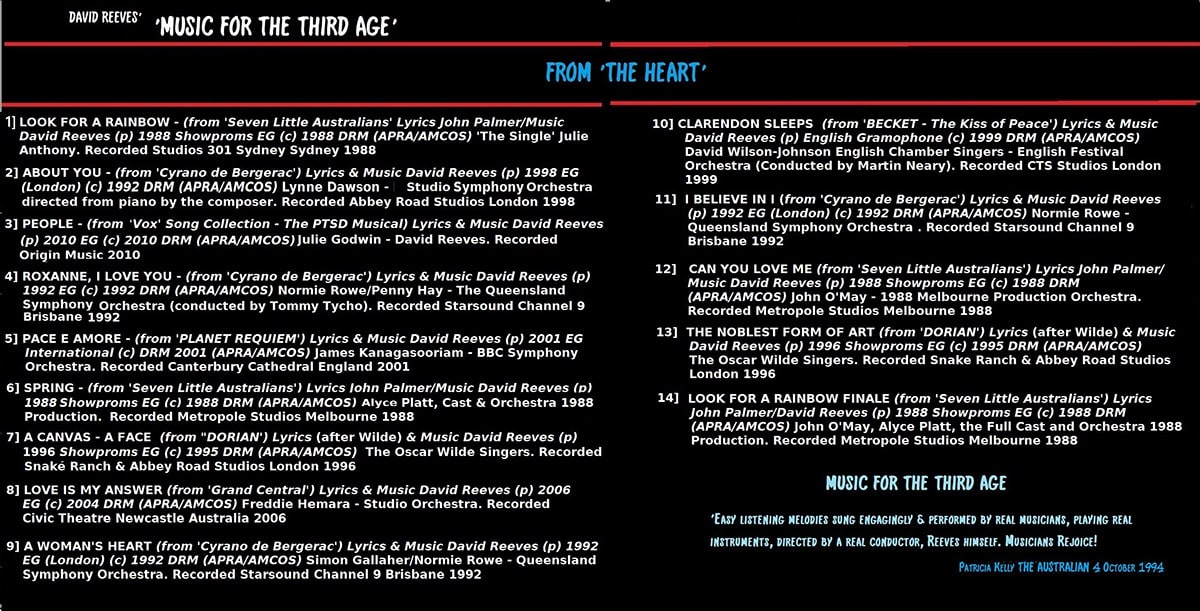 Volume 2.1 – From the Heart
Available from our Online Store