Expatriate Australian composer, organist, and conductor, David Reeves began his musical life as a chorister in the choir of St James King Street Sydney. He studied at the Sydney Conservatorium of Music under Alexander Sverjensky (piano), George Faunce Allman and Norman Johnston (organ) and won both of the coveted overseas music scholarships available in the early sixties, the Alice Bryant Memorial Scholarship for Organists and the Sydney Organ Society Scholarship for Overseas Study.

His first organ appointment was as honorary organist for Sydney Hospital Chapel and his first professional organ appointment was as Director of Music at the Garrison Church Miller’s Point (the Rocks) both whilst still at school. Whilst at the Conservatorium he was appointed to the staff of Abbotsleigh by Betty Archdale where he became Director of Music, building the music department whilst at the same time arranging and performing. He worked as a recitalist in all the main venues in Australia including ABC radio broadcasts and recordings on the organ from the Sydney Town Hall. He was especially sought after for his final improvisations which concluded nearly all his recitals and were a feature of his liturgical performance. He became particularly identified with the ‘Hill’ organ in the Sydney Town Hall where he worked extensively between 1963 and 1978 as a recitalist and performing at Civic Receptions, School Speech Days, even evenings for the presentation of advertising awards and in broadcasts for the A.B.C. as well as annual performances with the Oriana Singers both of the Bach St. Matthew and St. John passions conducted by Norman Johnston. His career took off when he won the coveted ‘Ernest Trueman Organ Competition’ in 1963. He recorded the first commercial organ album of the Sydney Town Hall organ on the Unison label in 1971 which set a record for sales of an Australian organ recording at the time. This now benchmark Sydney Town Hall organ recording is a collector’s item being the original recording of the Town Hall organ. It has been digitally re-mastered twice under it’s several licensed franchises. Between 1971 and 1978 Reeves went on to record nine organ albums on instruments throughout the country. 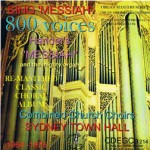 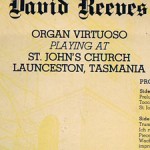 For eighteen years he accompanied the very popular annual Combined Churches’ presentations of Handel’s “Messiah” conducted by Richard Thew. The choir grew to some eight hundred voices and these performances filled The Sydney Town Hall for three nights each year. They were a highlight of the Christmas calendar in the sixties and seventies. During this period he was appointed accompanist for the Sydney University Graduate Choir whose choral repertoire was wide and included the major works of Bach as well as some modern composers.

The renowned firm of English organ builders, J.W. Walker and Sons expanded into Australia in the 1960’s and appointed Reeves as their recitalist leading to the opening recitals of many new and rebuilt organs throughout Australia. He also indulged his passion for jazz at several venues in Sydney and for several months took on the musical direction of a leading Sydney nightclub until his other commitments made this impossible.

By the end of the decade he had reluctantly resigned as Director of Music at Abbotsleigh so as to open his music school ‘Bainbridge Reeves Academy of Music’ which became well known in Sydney and during this period he adjudicated for Channel Nine in Sydney with Terry Dear’s ‘New Faces’ Talent Programmes. During this time one of his personal Higher School Certificate students topped the state of NSW in his final examinations.

In the late seventies he started to move more into advertising, film and commercial music and was awarded many creative contracts including the Hanna Barbara Christmas film of “Silent Night”, the musical recording “Pilgrimage” an official commercial album celebrating the musical highlights of the first Papal Tour of Australia, a music and poetry album featuring the voice and writing of Sydney radio personality John Laws, all through production company David Reeves Productions.

Music education has always been a passion and Reeves has adjudicated numerous Eisteddfods including the City of Sydney, Parramatta, Gunnedah and Tamworth Eisteddfods amongst many others. He has given workshops, was a visiting Australian composer at Gordonstoun School in Scotland, and was the founder of the Australian “Operation Young Composer” Award programme which has provided opportunity for overseas study for several young Australian composers. He has given of his time to a number of schools and individuals in the interests of advancing the personal musicianship of young people over the years, including through ‘music camps for performance and composition’.

He was especially grateful following a casual conversation at his music base in Turramurra in 1977 to begin a wonderful short period at TAS, the only country GPS school in NSW in the late seventies. The local press wrote, “Reeves spoke of this as being one of the most rewarding experiences of his life where he revelled in the time he was able to give to his choir, his ideas on music education and his theatrical composition. He has loved every minute working with the fresh young minds of his music students and really hopes they learnt a little from him for he certainly learnt a lot from them”. 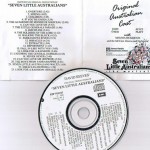 The Australian Bicentennial Authority appointed Reeves as composer for the soundtrack to the promotional film for the “Tall Ships” celebration on Sydney Harbour in 1988. Also in that year he produced his first theatre musical, “Seven Little Australians” based on the classic Australian story originally created by Ethel Turner, which opened at the Comedy Theatre in Melbourne. The musical was to run for two hundred and thirty performances in the main theatres throughout the eastern states. It broke all box-office records for a truly home grown Australian professional stage musical (playing to a paying audience of over three hundred thousand) and was the first truly successful home grown stage musical to be composed, created, written and produced for theatre in Australia. The Royal Queensland Theatre Company produced a sellout season in 1991 and David Reeves was nominated for an ARIA award for his score and original EMI cast recording of “Seven Little Australians”. The amateur rights are now regularly taken up and many musical societies have performed the piece in recent years. 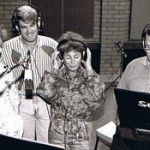 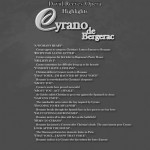 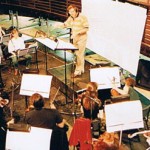 David Reeves’ opera “Cyrano de Bergerac” was similarly received when recorded by members of the Queensland Opera accompanied by the Queensland Symphony Orchestra. Concert performances of the opera were given in 1994 under the auspices of the Queensland Performing Arts Trust and the opera was narrated by Sir John Mills. Reeves was presented with the Variety Club Award for Service to the Arts in 1995.

By now completely based in London, he scored Oscar Wilde’s “The Picture of Dorian Gray” which was performed on the West End. The treatment of the text was extremely controversial which was reflected in several negative critiques in 1997. In 1999 Reeves returned to more conventional texts and recorded his oratorio “Becket-The Kiss of Peace”. 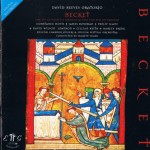 Becket, Kiss Of Peace Cover of the original studio recording

David Reeves during recording of the studio album ‘Becket’

A subsequent performance of this work became the highlight of the Canterbury Festival in 2000. The performance was given under the auspices of HRH Prince Charles and raised funds for the Prince’s Trust.

The performance featured the choristers of Canterbury Cathedral with the English Chamber Singers, the English Festival Orchestra and soloists including James Bowman, Gillian Keith and David Wilson Johnson. In the critiques Sir David Willcocks wrote as follows: “In the ‘Kiss of Peace’ the gifted Australian composer, David Reeves has produced a score that judging by the response of the singers and indeed all who heard it when first performed, gave great pleasure and was truly enjoyed. It is a work that appeals to all. Reeves is not afraid to write music that is truly approachable, beautiful and memorable.”

Amongst Reeves’ many recordings a recent EP release is one featuring highlights from recordings made at Canterbury Cathedral, including a performance of Reeves’ “Tuba Tune” performed by the composer.

David Reeves has recently been commissioned to write a work on the subject of St. Francis of Assisi by the organisers of the Assisi Festival of Peace. The work “Planet Requiem” is to be performed in the Franciscan Basilica in Assisi Italy.

In 2017 – 18 Reeves was invited to edit and arranged the new ‘STAGE DOOR’ SONGBOOK SERIES titled ‘SONGS FROM AUSTRALIAN MUSICALS’. Published by Origin Theatrical and distributed internationally through Hal Leonard Music, it represents some of the best theatrical music and lyric material originating from Australia, all having been partly or wholly created by Australians.

In 2019, back in Sydney Reeves was interviewed for the SYDNEY ORGAN JOURNAL. Editor Peter Meyer reminisced about his life including the early days when Reeves first made his name as an organist. The article titled ‘EXPANDED HORIZONS’ is included under MEDIA.

During 2019 -20 Reeves workshopped his new musical, ‘EVER THE BEST OF FRIENDS’ at the SYDNEY CONSERVATORIUM OF MUSIC. 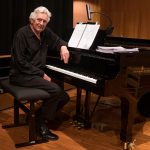 David Reeves at the Sydney Conservatorium of Music 11 Feb 2020